"From the Crane's Back" at Trace Foundation"

Rima will be talking about her recent book, "Save the Himalayas," her organization, "Books for Children" and her recent visit to the Tibetan refugee schools in India. The guest readers will read from the book in Tibetan, English and Japanese. The original drawings from the book will be exhibited, and the book signing will follow.
*Free admission

Link: From the Crane’s Back: Reading “Save the Himalayas” with Rima Fujita (Buddhadharma Online)

"Rima Fujita~Her Journey to Dharamsala to Deliver Her Books~"

There will be a special feature article on my recent trip to Dharamsala, India in "SPUR" magazine (June issue) that will be in stores on April 23, 2012. 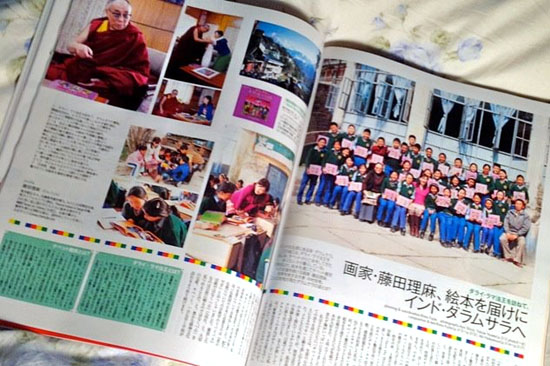 ‎"Save the Himalayas" in Books in Brief "Shambhala Sun" March 2012

The latest children's book, "Save the Himalaya" will be published in October 2011 worldwide, and we will be donating a few thousand copies to 82 Tibetan refugee schools in exile. (See more details.)

19/1/2011 "TB AWARE" has been translated into Italian by the San Raffaele Hospital in Milan, Italy (San Raffael Del Monte Tabor Foundation) and made into a 32-page- 2011 calender.

"TB AWARE" has been translated into Italian by the San Raffaele Hospital in Milan, Italy (San Raffael Del Monte Tabor Foundation) and made into a 32-page- 2011 calender. It will certainly help promote the seriousness of TB among the Tibetan community in India. (*The calenders are not for sale.)

In May, 2010, "TB AWARE" was reprinted (5000 copies) by Johns Hopkins University Hospital in the U.S., Delek Hospital in India and the Italian Foreign Ministry, and was distributed to the Tibetan community in India. There are still many Tibetans who are not aware of TB, and many of them may have it without knowing it. I truly hope that this book will help bring more awareness to the community and be useful.

I have received a letter from Tsering Lhamo, a young Tibetan woman who grew up at the TCV in Gopalpur, India and now lives in Belgium. This letter made me so happy and I want to share it with you:

I visited TCV in Leh, Ladakh where two thousand Tibetan refugee children live in 3,500 meter high altitude mountains. I was glad to hear that there are only 19 orphans here and that is much less than other schools. In the library there were my books: Wonder Talk, Wonder Garden and TB Aware on the shelf. Several copies of my book, Wonder Talk, have lost its covers and gotten so old and torn. They must have read by children so many times.

I am currently working on a children's book called, "TB AWARE" that is written by Rachel von Roeschlaub, a scientist at Cambridge. It is an educational book that teaches how to avoid getting tuberculosis. When Rachel taught science as a volunteer at a Tibetan refugee school in India she witnessed so many children dying with TB every year. This disturbing experience made her commit to create this book. Rachel asked me to draw illustrations for her texts in order to make the book more inviting for the kids to read. I have drawn eleven pieces and those three are a part of them. The foreword is written by Dr. James Watson, a Nobel Prize Laureate who discovered DNA. The book will be donated to all the refugee schools, monasteries and nunneries in India, Nepal and Bhutan this fall.

Those children's books are now available at Asia Society (725 Park Avenue), WHOLEFOODS at Bowery downtown and ABC Carpet & Homes! They are also available at Rubin Museum of Art and Tibet House Museum.

My project was written up by the news papers Chennai, India.

His Excellency Kodaki, the Consul General of Japan's speech.

I am happy to announce that Books for Children has donated 2000 copies of Wonder Garden~ A Tale of an Old Dog and a Baby Rabbit~ to the education department of the Dalai Lama's Tibetan Government in exile, India, on March 7 2006. The books will be distributed to 82 refugee schools in India, Nepal and Bhutan, as gifts for Losar (Tibetan New Year.)
I thank again everyone who has supported me to make this happen, and I am praying that the Tibetan refugee children will enjoy my book.
Thank you very much! Rima

This afternoon, Rima Fujita will read from "The Old Dog and the Baby Rabbit" in Tibetan, Japanese and English.
Children's Program
Sunday, October 9, 1-3 p.m., Free

Book signing on my new children's book,
"The Dalai Lama's Compassion: Wonder Garden~
A Tale of an Old Dog and a Baby Rabbit~

from 6pm~ Cocktails and more!

A Charity Event for Orphans

My second children's book, "The Dalai Lama's Compassion: A Tale of an Old Dog and a Baby Rabbit" for the Tibetan refugee kids in exile will be published and this is a fundrasing event. The opening party will be held on Nov. 11, at Tokyu Bunkamura, Tokyo!

I am happy to inform you that "WONDER TALK" (children's book) has been officially selected by the United Nations as recommended reading for educators and teachers throughout the world.
I believe that this will help more people in the world learn about Tibet and its unique culture.
I thank you again for your kind and warm support!

I have sent 2000 copies of Wonder Talk, a Tibetan Folktale Children's Book that I produced, to the Tibetan children in Exile such as India, Nepal and Bhutan. The books were distributed to the kids in 80 refugee schools and I was told that the kids were enjoying the book very much! The following is the letter from the Education department of the Tibentan Government in Exile:

Greetings to you! We are very happy and thankful to receive 2000 copies of your children book-A Tibetan Folk Tale forTibetan children in various schools in India, Nepal and Bhutan. The book was briliant and I am sure that the Tibetan children will definitely enjoy reading your book. We have already known that children from nearby schools appreciating your work.

We would like to inform you that your books have been distributed evenly among different schools in India, Nepal and Bhutan, so that maximuim number of children could enjoy reading your book and benefit from it.

We would send you the acknowledgement from each school as soon as we receive them from all the schools.

Thanks a lot for your contribution.

With warm regards and best wishes,

Photo1) This is the completed version of "Everybody's Drawing" - I outlined the Mandala drawing and divided into small sections and put a various price in each of them. Participants chose whichever section they liked and paid in order to paint that section. About 300 people participated! Thank you all!

Photo2) Ms. Tsuchiya of Cafe Matsurika who donated beautiful sweets for the benefit event and Ms.Matsubara who donated lovely tea. The middle is me. Thank you, ladies!

Photo3) Mr. Hamazaki, a friend of mine sang beautiful songs he wrote specially for the Tibetan kids at my benefit event. Everybody was deeply touched!

Photo4) I was able to send 2000 books, "Wonder Talk" to the Tibetan kid in exile! Thank you, everyone for your support!

Photo5) We raised 350000Yen from this drawing! Thank you again for everyone who participated in this "Everybody's Drawing."